This release concludes the first chapter of Sekaimo! Hooray, progress!

It’s the following morning after the chaotic storm had swept through my evening.

Maria’s step to solving my ‘unhappiness with the present situation and treatment’ that I talked about yesterday was quickly revealed to me in full detail.

“Allow me to introduce her to you. This child’s name is Lily, and she will be in charge of Onii-sama’s personal security from now on.” 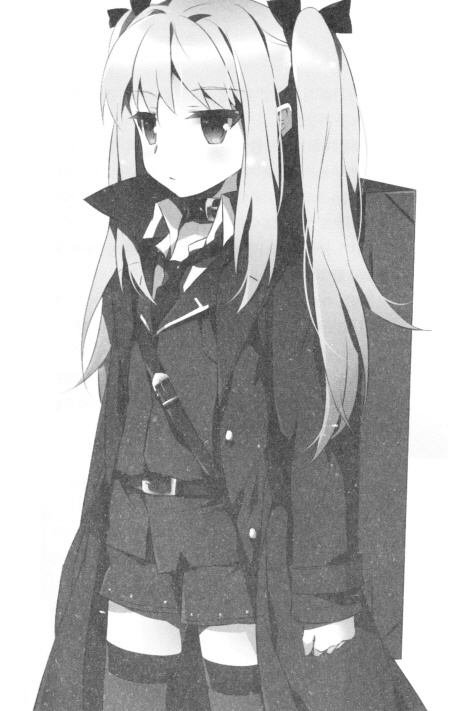 I observed the little girl from head to toe, with a look of disbelief on my face.

Wearing a black patent leather trench coat over the outfit with a design reminiscent of a Nazi officer’s uniform and a violin case on her back, the little girl is just staring blankly into space with her eyes devoid of emotion.

Somehow, she doesn’t seem human. Instead, the little girl is like an exquisitely crafted French wax figure.

“H-hold on a second. Are you telling me that this little kid is going to be in charge of my security?”

Could it be that she’s displeased with my open finger-pointing and blunt, ignoring attitude? The little girl named Lily mutters something and puffs up her cheeks, pouting.

Perhaps it’s due to the way she skips and pauses her sentence; she has a unique style of speech where the context feels somewhat disjointed.

Such minor idiosyncrasy doesn’t make any difference to me, though.

“Ha! No matter how I look, your body’s only half my size! If you’re not a little kid, what are you then? A peanut?!”

“Lily is one of the top agents we Bandersnatch take pride in. It`s not a good habit to judge people based on their appearences, Onii-sama.”

Dorothy, who was listening closely in silence, jumps into our conversation.

“It would seem a good beating is needed to knock some sense into him, Onee-sama.”

“You’re the one who needs a good beating, you damn little sister.”

“What the hell are you—”

Before I could finish, my body rattles to a halt.

Lily was already behind me with her arms coiled around my shoulder joint.

Then, with a sound cracking noise, my shoulder twists 90 degrees.

A mountain of pain and a river of tears.

It's somewhere along those metaphors.

I've realized it too late. If I follow my previous logic, I should have never stood up against that little girl.

You see it all the time; a lone hero, with nothing to protect himself, beats up an entire mob of gangsters in the blink of an eye. It’s a cliché you often see in actions movies.

"Lily will be assigned as Onii-sama’s personal bodyguard. From now on, with the condition that you’re accompanied by Lily, Onii-sama should be able to do things freely.”

"Also, you will be attending 'school' right away the day after tomorrow. Since I’ve already finished your transfer a few days ago."

Finished my transfer a few days ago?

It was just the day before yesterday that I declared I'll stop living a life of imprisonment that has been going on for nearly two weeks. Then was Maria waiting for this sort of situation to happen from the beginning?

In the end, it just reminds me of the pointless commotion I caused yesterday night, and how downright embarrassing it was.

As I nod my head lost in trivial thoughts, Dorothy barges in, shattering the mood as if it was made out of cheap Chinese glass.

"W-wait a minute... Onee-sama? You're not letting that stupid idiot attend Illuminati Foundation Academy, are you?

The school name evokes an extremely conspiratorial secret society. Like, as if they’d be doing shady religious rituals instead of classes.

"Is there a problem with that, Dorothy?"

“I’ll definitely die from embarrassment if that idiot goes to the same school as me!”

"Well, it’s not like I’ll be enjoying your company!”

"Hmph, I know you're actually happy that you get to attend school with a beautiful girl like me.”

Somebody please do something about her bishoujo complex.

Dorothy, whose face is full of complaint as usual, is assisted by Lily.

"…Lily too, being with that idiot, embarrassing…"

Dorothy hugs Lily and rubs her cheeks against her. Despite Dorothy’s fierce skinship, Lily maintains her poker face with a blank expression.

Seeing how the situation is going, it appears they’re working together in making me look stupid. No matter how much I try to think of a good motive to this, the only conclusion that I can comes up with is:

Just what have I done wrong?

Perhaps it was unnecessary for me confirm it, since I already knew that much. But still, it’s a little sad hearing it directly from them.

Like a seven-year-old kid running away from a bully, I run into my room with tears streaming down with my face. 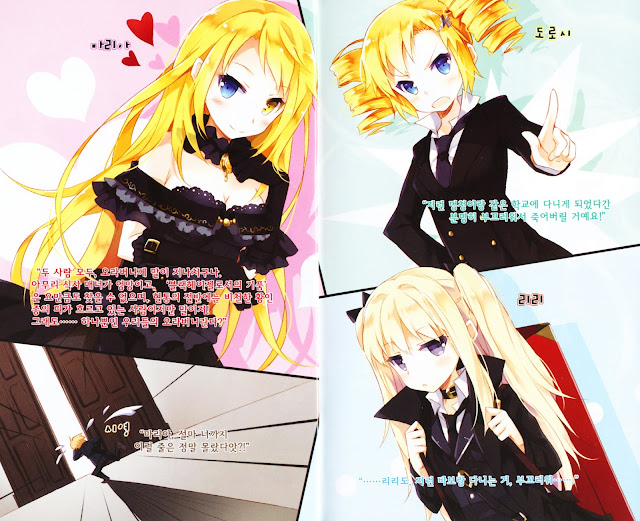 Posted by Imoutolicious at 12:19