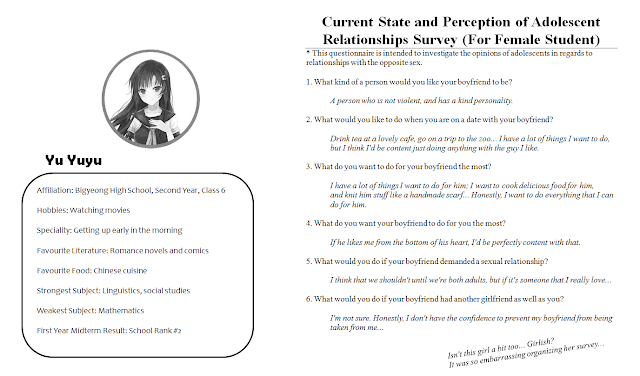 What greeted Yu Yuyu upon returning home was the sound of silence, as though the place was deserted.

The house was covered in darkness, but rays of light shone through the cracks in the door of the study; probably her mother still working.

Her mother, a designer, was a busy person. It's likely that she didn’t even notice her daughter hadn't come home yesterday and had stayed up all night at the hospital.

Not even feeling like saying 'I'm home', Yuyu headed straight for her room. She put down her bag and took off her outer garments, and then she made her way to the bathroom to clean her sweat-stained body from being at the hospital this whole time.

After filling her stomach with milk and bread from the kitchen while waiting for her bath to run, she immersed her body inside the bathtub, now with a sufficient amount of comfortably warm water.

Slouching her weary body inside the bathtub, Yuyu let out a deep sigh.

Really, a lot of things had happened between Friday night and now; she never imagined that things would end up like this.

“Glasses... Does he really not remember anything...?”

Tears started to well up in her eyes unconsciously as this thought crossed her mind. The loneliness she felt from being totally forgotten by the boy was unbearable.

Yuyu thought to herself:

If he doesn't remember anything, then...

Yu Yuyu clenched her fists inside the bathtub.

Her relationship with him could have been completely severed at any moment. Luckily, however, thanks to Han Ka-ryeon's arrangement, she was given the opportunity to eat lunch and study together with him like they always had done. The allotted time was limited, but all she has to do is win his heart using that time.

Everything will be settled when he recognizes her as his one and only girlfriend.

However, Yuyu was crestfallen...

“That girl named Han Ka-ryeon... She was so pretty. His younger sister was cute, too.”

Would she be able to win in a competition against those girls?

Although she did not want to believe them, they had said they had been going out with him and were in an intimate relationship. Having listened to the girls talk, they seemed so outgoing compared to her. Would she be able to win his heart completely so that he won't ever be unfaithful with the other girls?

Thinking of a way she could accomplish this, Yuyu noticed the white buds floating on the water right in front of her eyes.

The two buds felt lighter than usual from the buoyancy of the water.

She had never heard anything like that from him before, but it's been said that boys prefer big breasts...

Although Yuyu honestly wished her breasts were smaller, if he preferred them that way...

“Wh-What do you think, Glasses? Do you like them this big?”

Holding up her breasts with her hands, Yuyu talked to herself.

“H-How should I do this? He didn't react much when I clung to his arm earlier... Maybe that was nothing... Do I hug him tightly from behind and rub them against his back...? Or have him touch them with his hands? If I have him touch them through my shirt.... No, maybe through my bra would be better if I'm going at it... B-But what do I do if he later wants to touch them directly? Th-Then... Ahh, Glasses, if you squeeze them like that, I'll...!”

Yuyu muttered in an aroused voice, and noticed the hands holding her breasts had tightened without her realizing.

Yuyu took her hands off of her breasts and suddenly lowered her head. With her face buried, she was shaking all over.

It wasn't like anybody was watching, but she was ashamed of herself for having done such acts. She was so ashamed that she wanted to squirm, and flail her limbs.

Letting out a sigh, she rested her head on the rim of the bathtub.

But she couldn't afford to hesitate as the current situation required immediate action.

She recalled the images of the boy that she has been spending time with at school.

He had a little strict look.

The bespectacled boy with a slightly strict appearance. Yuyu had been watching him for the past year, and he was the person she spent most of her time with than anyone else during those three months.

And he was the person she wanted to be with.

Sniffling, Yuyu muttered to herself:

Putting her earnest hope into it, as if she were offering a prayer.
Posted by Imoutolicious at 14:43