Finally, it's time for the little sister to shine!

Anyhow, we are aware that some of our projects have been quite slow lately, but please continue your support and readership. KTLs and EDs all have lives and priorities like everyone. 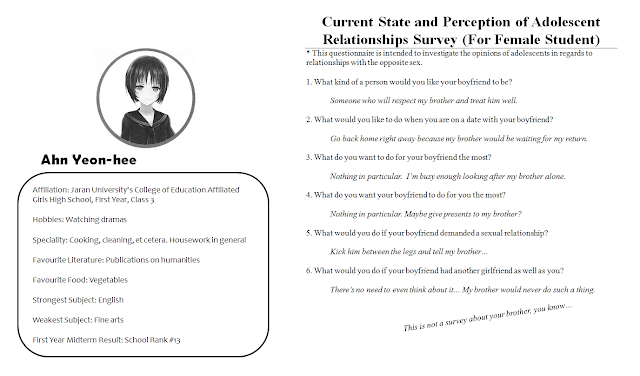 “The café your brother works at is called ‘Saint,’ right?”

“But when I went there yesterday, all of the employees were females.”

“My brother doesn’t work there on the weekends. He only works on weekday nights.”

“Ah, really? Then we can’t go. Are they open late there?”

“It’s useless; my brother leaves work when we finish our evening self-study session.”

“Aaah… I wanted to see your brother.”

“Say Yeon-hee, could you introduce him to me later?”

“You said he doesn’t have a girlfriend, right?”

“Eh? Could it be that he got a girlfriend?”

“And what if he doesn’t? You’re going to ask him out?”

“Hey, Yeon-hee, did you have a fight with your brother?”

“…I don’t particularly recall talking that much about my brother.”

“But you have. About how your brother wore a mismatched pair of socks and you made him wear the correct ones, or how your brother knocked on your door in the middle of the night and you wondered what it was... Only to find out he came over to borrow some leads because he ran out of them while studying. You’ve told me all sorts of stories in every little detail.”

“…I’ve only told those as passing remarks.”

“Is that so…? But in any case you haven’t said one thing about him today.”

“Did something really happen with you and your brother?”

“There’s no way my brother would have a girlfriend.”

After tapping her fare card on the electronic reader, Yeon-hee alighted the bus.

As if to rid herself of the hectic atmosphere that was inside the bus, she took a deep breath in the cold night sky.

Even when the evening self-study session had ended, it didn’t feel real that school was over. It was only when she parted with other people and was finally alone that she truly felt her day as a high school student had finished.

Enveloped in an unknown melancholy, Yeon-hee started walking towards her home.

It wasn’t like this before. She used to come home before dark, and have supper together with her one and only family member.

That everyday life had started to change since last year. It was because her brother had become a high school student. Although her brother had decided not to attend supplemental classes and evening self-study sessions, because he had started working part-time regularly he would not return home until late into the evening.

And this year Yeon-hee had become a high school student as well. Because the Collegiate High that Yeon-hee attends has a strict environment, it wasn’t easy to skip evening self-study sessions. She wanted to eat at least some dinner with her brother, but it was the school’s policy to never dismiss students until the self-study sessions were over.

In the end, if they exclude the weekend, the only time they could spend together as family was at morning and night.  Fleeting moments where the times they sleep and her brother is immersed in his studies holed up in his room were included.

And her brother spent the remainder of the day aside from those times outside with someone else.

The girls that were claiming to have had intimate relationships with her brother. Recalling the images of those girls, Yeon-hee bit her lips.

The girl called Yu Yuyu was gentle-looking, but she had a voluptuous figure.  However, it wasn’t like she was plump, she carried her weight in all the necessary places.

As for the girl called Han Ka-ryeon; her innocent looks and slim figure stood out. The beauty of her stretched legs was a head-turner even for a girl like Yeon-hee.

In contrast, what about herself? Her face and body were that of a mere child.

If Yeon-hee didn’t have a baby face, if her breasts were larger and her legs slenderer, would her brother have not been so easily seduced by other girls?

…No. Her brother was not the kind of person who is swayed by a person’s looks. He was completely different from those other boys who get worked up over base chatters about who is pretty or has a decent figure.

Her brother was not that kind of person!

Yeon-hee stopped and took deep breaths staring up at the night sky to regain her calm.

The kind of person who wouldn’t lay a finger without a good reason. Doesn’t that mean he would lay his hand if there was a good reason?

And at the same time, that meant if you have no good reason he would not lay his hand on you.

If the day is going as per usual, her brother should be on his way home from his part-time job.  From now on is the time between only family— only siblings—that nobody is able to interfere.

Nobody is able to interfere.

“I won’t hand my brother over to anyone else...”

Walking alone in the empty streets at night, Yeon-hee spoke with a voice as though praying.
Posted by Imoutolicious at 08:30