[KLN Review] Dawnbringer: The Story of the Machine God v01 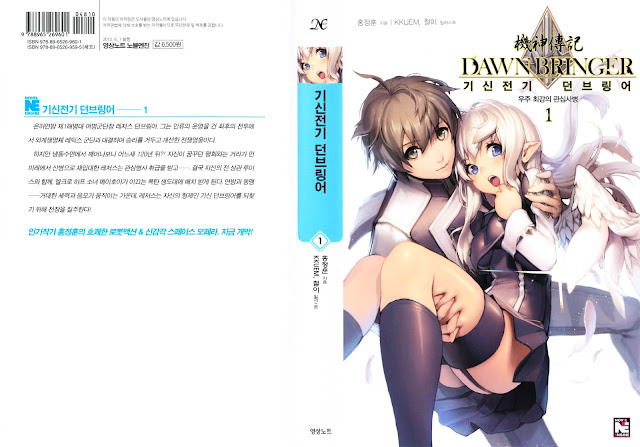 Introduction
In general, Korean light novels of science fiction are pretty rare. There have been a handful of them over the years in the unforgiving market, but none had the popularity or sales to compete against the heavy hitters from Japan. As is often the case with unsuccessful series, they were either axed on the spot or killed off silently with the passage of time. Despite all the sci-fi titles that have fallen into the dark abyss of failure and oblivion, Youngsang Note ventures into the genre of science fiction at the most opportune time during the prevalence of Korean light novels with their publication of Dawnbringer: The Story of the Machine God— the work of famous fantasy writer Jung-Hoon Hong, renown illustrator KKUEM and rookie illustrator Chul-i. And boy, they invested some serious money into this series! Aside from its A-team, it was given: Teasers, limited pre-order goods, a promotional video, a special homepage and an event-only calendar. Some of the stuff I previously mentioned can be seen below: 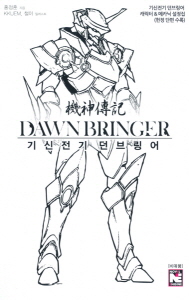 
Waning: Engrish in PV! Their every wear!


After all their efforts, did the series remain afloat or sink into its watery grave? We'll have our answer at the end of the review, so let’s get started and examine the newest entry in the genre of science fiction.

Background
In the year A.D. 2120, the human race discovers the ‘shadows’ of Letix Oldone on Mars. And 80 years later, they attain hyperspace navigation through their encounter with the hyperdimensional lifeforms and their Alter Cores. But as the human race begins its exploration into the infinity of the universe, a different and hostile race of Letix launches an unstoppable assault against Earth. In order to protect the human race from complete annihilation, the Uberlord of the Letix Oldone gives birth to eight Kishins (Machine Gods)—the first Alter Armors—to fight against the new threat. However, no human being is able to pilot the Kishins. To solve this problem, the Letix Oldone create the First Applicants— a new race of humans that are capable of piloting and communicating with the Kishins. In the final battle against the hostile race of Letix with the fate of humanity on the line, the Space Federation sends Commander of Dawn Corps Lezirth Dawnbringer, one of the last surviving First Applicants, on an all-or-nothing mission. He somehow manages to defeat the Letix with pure willpower and returns to Earth safely, where he is put to coldsleep on April, Universal Year 69.

Story
The novel begins with our main character Lezirth Dawnbringer awakening from his cryogenic sleep alone on April 4, Universal Year 189 in Iphis-2, a planet under the direct control of the Space Federation. Unbeknownst to him, the hardliners in the military have deleted his actual records from the Space Federation’s system and replaced them with fabricated history. While Lezirth was asleep for 120 years, the Space Federation had become an exploitative bellicist—colonizing distant planets, enslaving and abusing other alien species and replicants, and simultaneously waging wars against four enemies: the Letix, the Asa, the Elcro, and the Rebel Replicant Forces. After few comical incidents here and there, Vice Admiral Lezirth Dawnbringer is re-enlisted into the military as a mere recruit and meets up with his fellow First-Replicant Admiral Luise Maynard, and then both of them are assigned to the Special Care Platoon headed by Ensign Liu Meihowa and Petty Officer First Class Aroha Pereira. The platoon is composed of expendables: half-bloods, replicants, and misfits from the Space Federation.

While the story follows the formulaic harem setting and antics of our seemingly adolescent protagonist, it often touches upon the dark and sinister nature of mankind. That’s nothing unusual; however, it really struck me when it was presented through one of the half-blooded characters. Being born as an illegitimate child of a high-ranking human officer through enslavement and rape, she was stigmatized and treated as a plaything throughout her life of confinement. It was all too heartwrenching hearing the rest of her confession. But thankfully, Lezirth’s humorous and considerate personality lightens up the mood and uplifts those who are lost and disheartened. And he’s still one hell of a badass protagonist.

The actual premise of the story is rather simple and straightforward: Lezirth works together with Luise and the platoon to restore his Kishin—Sacred Sword of Justice Dawnbringer—and his tainted honor. But this happens at a snail’s pace on a local speed limit. Mostly, you’re there to enjoy the interactions between the characters and their comedic military life…while it lasts. Oh, that and our pettanko Luise. HNNNG.

Are those garter belts? Whatever, they're sexy!

Lezirth Dawnbringer (Vice Admiral)
Despite how he looks, he is actually 220 years old. With a height of 182cm, he’s the legendary war hero who saved humanity from the brink of extinction.  As one of the First Replicants, he was the pilot of Kishin Dawnbringer and the Commander of Dawn Corps. He possesses telekinetic and teleportative powers, which are legends of their own. Although he is now officially a recruit, he still acts like a Vice Admiral and uses familiar forms to other NCMs and officers. Nevertheless, he is honest and sincere at heart.

Luise Maynard (Admiral)
Born earlier than Lezirth as a First Replicant, she is only 159cm tall.  Emotional and kind, she has the appearance of a naïve and pure maiden. But there is a rather frightening side to her. Formerly the Chief of Staff and pilot of Kishin Tetragrammaton, she’s the genius computer engineer that created the Space Federation’s military system. She possesses clairvoyant and telepathic powers, which she sometime uses on Lezirth in secret…for personal reasons.  Lezirth has a high regard for Luise, and treats her with the utmost respect and reverence, much to her dismay. Poor Luise, she just wants to be seen as a normal girl!

Liu Meihowa (Ensign)
An 18 year old half-blood between human and Elcro, she volunteered for nonbattle service at a military academy to escape persecution and her pre-arranged marriage. Although she was supposed to have graduated from academy summa cum laude, she was denied of her honors because of her mixed blood. With a medium height of 170cm, she's the new officer in charge of the Special Care Platoon. Her favourite food is crabs, and she's a fervent fan of old movies and documentaries. Stern and strict, she later opens up to Lezirth and places great trust in him. Her major weakness is her wings— they are sensuously sensitive.

Aroha Pereira (Petty Officer First Class)
Slightly taller than Meihowa by five centimetres, she’s a 19 year old half-blood between human and Asa. She volunteered for military service to become independent from her adoptive parents and the Pereira family. Although her circumstances are similar to Ensign Meihowa, she harbors a hatred for Asa’s civilitazation, culture and custom, and doesn’t feel burdened by the fact that she might have to fight her own kind someday. Feminine and attractive, she knows how to handle men and is enjoying a rather easy life in the military. Despite her promiscuity, her dream is to become a good wife and a wise mother.


Art
This book has two illustrators: KKUEM, cover and character design; and Chul-i, illustration and mechanic design. Do you see the colored pictures above? Nice, aren’t they? They are drawn by KKUEM, and those are pretty much all he draws for the book. What’s worse, those character illustrations are only included in the booklet. If you didn’t pre-order the limited editions, you would’ve missed out on them. Still, I have to hand it to him for creating such wonderful characters, especially Luise and Meihowa. Kudos to you. 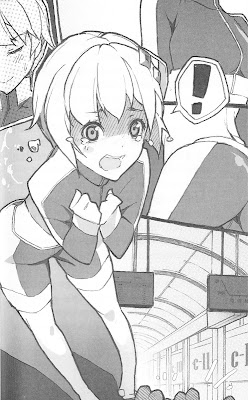 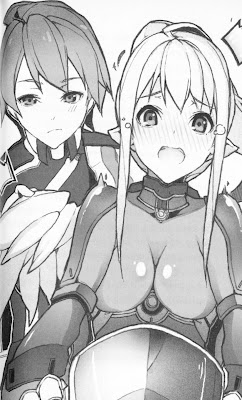 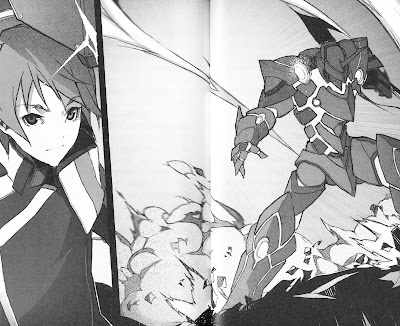 It's hard to believe he is a rookie with his level of skill. Although the art style lack smoothness and fine detail, it has a certain flair that gives it its own unique feel. It's quite refreshing for a change.

He's also quite damn talented when it comes to mecha. I'm looking forward to seeing more of them. 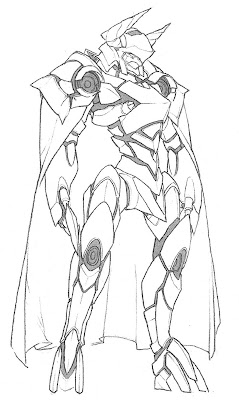 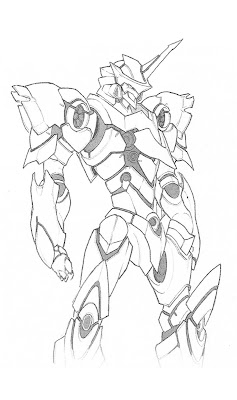 Despite being lackluster and coarse, his color illustrations fit rather well with the novel. 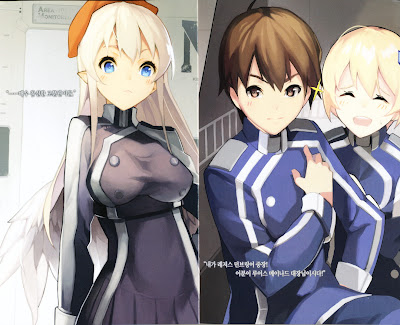 "Looks like you have a loose screw or two..." 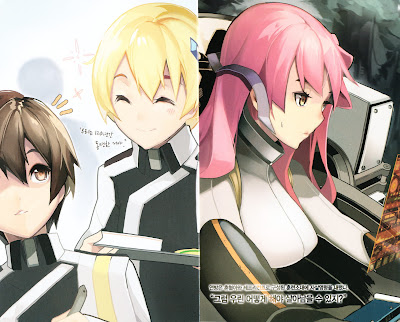 From eating rations to dying on the battlefield.


Conclusion
As expected of famous fantasy writer Jung-Hoon Hong, he does a brilliant job of worldbuilding.  Maybe a bit too much at the expense of a complex story and pace, though. The progress in the first volume is so slow, and it is made even slower by an unnecessary interruption with a trip to the "beach"… Um, say what? Aside from those, it is a pleasant read and the joyful characters keeps you entertained with their distinct personalities. With a second volume on its way on August, this series definitely managed to stay afloat.

Posted by Imoutolicious at 09:52