Is this what you do before you meet your date, ladies? Anyway, this girl is dangerous. 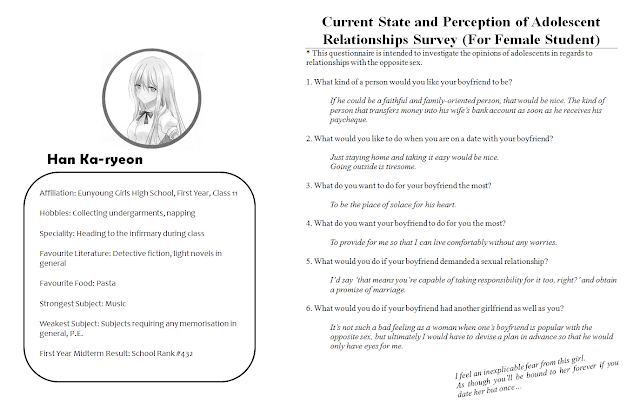 Displayed atop of the white bed were numerous undergarments.

Pure-white lace reminiscent of a wedding dress; mint color with silver dots; all black, strong like dark chocolate; gold and beige with luxuriant floral embroidery; frill-hemmed blue with dreamy patterns; fluttering rose colour made of chiffon; scanty, pastel-toned demi-cup and T-back; simple but with a cute design, made of white cotton…

It wasn’t only bras and panties. There were also translucent slips and bustiers with the brassiere and corset attached. There were even several garter belts embellished with plenty of lace.

Stockings of all colours were laid on one side: Simple pantyhose and a pair of fancy band stockings that have a distinctive lingerie feel with their silver pearl patterns. There were over-the-knee and stripped socks with ribbons mixed in as well.

Ka-ryeon looked down at her collection and smiled softly.

The bed, filled to its edges with the undergarments, looked like a garden full of flowers of various shapes and colors.

Because she had just got back home, Ka-ryeon was still wearing her sky-blue school uniform.

It’s 4:00 PM right now. Supplementary lessons should be well under way in schools by now, but Ka-ryeon was already home. Of course, she didn’t stay after school for late night self-studies either.

At Eunyoung Girls High School, which Ka-ryeon attends, supplementary lessons and late-night self-studies were compulsory. However, due to her circumstances where she has to help out her older sister—who looks after her alone—at her store, she was given permission to be exempt as a special case.

Soon, Ka-ryeon has to change into her casual clothes and head off to her older sister’s store, but there’s something she must do first.

Ka-ryeon muttered in a cheerful voice as she surveyed the undergarments on the bed one by one.

All the undergarments before her were the ones she had collected over the past year. In her childhood, she used to only wear what her older sister had bought her, but ever since she came to buy and wear her own undergarments, she had been collecting those that were to her liking one at a time. Because Ka-ryeon didn’t have anywhere else to spend the money, the majority of her excessive allowance that her older sister always gave her was being used as funds for the purchase of these undergarments.

They were purchased purely for her collection as a hobby in all respects, and not for the purpose of showing them to someone else. To Ka-ryeon, laces and other small garments graced with all kinds of adornments were cuter than anything else in the world.

But these small pieces of cloth that were merely cute were now waiting for Ka-ryeon’s selection as important ‘accessories’ bearing a different meaning.

“What should I wear, Sunbae?”

Ka-ryeon murmured to herself in a soft voice looking at the exhibition of undergarments spread out in front of her.

“I wonder what kind of style he likes. If I knew this would happen, I would have found out in advance.”

She had asked him before, but she hadn’t heard his answer.  Well, to be exact, his reply was that he had never thought about such a thing.

Of course, if a normal high school boy—moreover, a swot who pretends not to be interested in girls—has a style preference in girls’ underwear, that’s not a great sign, but… Han Ka-ryeon thought she should have at least found out about his favourite colour.

“Which design do you like the best, Sunbae? A demure one? A fancy one?”

Leaning over the bed Ka-ryeon muttered to herself, touching the undergarments one by one with her finger.

“Since you’re still a high school student faithful to your desires, would it simply be better if it’s more revealing?”

She poked the suggestive undergarment—which, if worn, seemed it would bare all of her butt—with her fingertip.

“Or do you prefer the innocent, white look?”

“Which one do you like, Sunbae? I’ll wear anything as long as it pleases you.”

Ka-ryeon was aware of how ridiculous she was beginning to appear.

Simpering and talking to herself in a lyrical voice with her undergarments spread out— her older sister would probably faint from the shock if she saw her right now. If that happened, Ka-ryeon would have certainly started living the life of a recluse for about three days with her door barred from the embarrassment alone.

But it can’t be helped; there are times when girls become like this.

Now humming a mysterious tune, Ka-ryeon examined each undergarment and picked them out diligently.

These various, small garments that she had collected over the years just because they were cute, had now become tools of temptation to capture the heart of a single person.

There is, of course, no guarantee that the undergarments she chose would be able to tempt him. There might not be a chance to even show them, and he might even arrive at a conclusion before she can.

But imagining how things will turn out, and to worry based on that imagination is…

“Sunbae... What should I wear to make you lose your self-control and act as your desires command... So that you will fall madly in love with me?”

An exceedingly exciting and enjoyable experience.
Posted by Imoutolicious at 11:39